This engaging one-man show written and performed by John Gogo revisits the gritty mining and logging towns of Vancouver Island on Canada’s rugged western coast. Haunting folk tales by four generations of a Nanaimo pioneer family offer a fascinating look beneath the surface of history unfolded from 1895 to 1995. Their songs explore the unique and layered lives of heroes and villains: the visionary Finns of Sointula, the notorious Dunsmuirs, labour martyr Ginger Goodwin, the ghost of Clarence Ballance and the infamous Brother XII of De Courcy Island.

Western Canadian folksinger/songwriter John Gogo is from a large musical family in Nanaimo, on Vancouver Island. After a two year stint as a Chokerman in a logging camp, he began his professional musical career with two of his brothers in the progressive rock band Graphics, touring around BC and Alberta. In 1985 John switched gears and began playing his acoustic guitar in pubs, beer parlours and at folk festivals. He released his first album 'Coal & Wood' in 1990, with original songs about his family history in mining and logging. He followed it up in 1994 with 'It Never Fails', an album with more of a roots rock feel, which included the cover and regional hit 'Baby Blue', featuring a guitar solo by the song's writer Bill Henderson (Chilliwack). More touring and TV appearances followed, from Victoria to Toronto, and his music videos ('I Don't Even Know Her', 'String of Pearls' and the title track) enjoyed rotation on MuchMusic & CMT. The year 1997 saw the release of 'Leave a Light On', with the single and video 'Brown Eyes'. The Victoria Times Colonist called John "one of the most talented singer/songwriters this area has ever produced" and the album "an atmospheric pop gem", a sound achieved with the help of co-producers Wayne Lorenz (Daniel Lanois, Emylou Harris) and David Kershaw (Sarah McLachlan Band). In 2002 John began a side career, appearing in the Other Guys Theatre production 'Moodyville Tales'. Next up was the 5 year run of 'Good Timber - Songs and Stories of the Western Logger', this time as co-creator as well as performer. John released his 4th studio album 'One of These Days' in 2010, and for the first time he was the sole producer and songwriter, while he continued to tour with 'Good Timber'. His 2015 release 'Coal & Wood (Revisited)' is a return to his early 'folk singer' days, featuring 2 songs from the original album plus a handful of new originals about people, places and historical events of Canada's western islands. 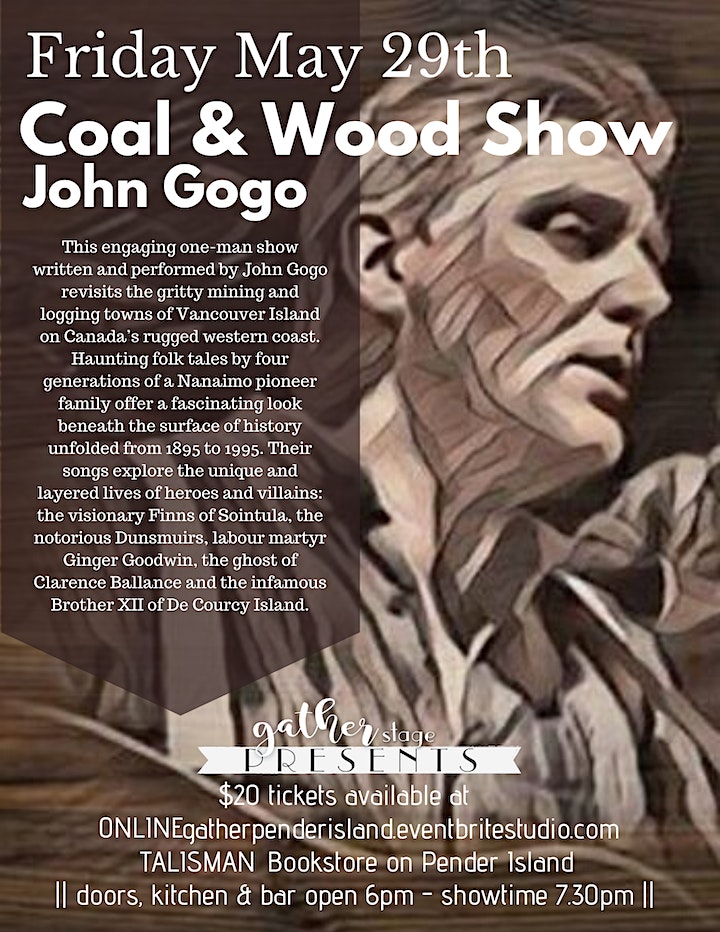