Canadian roots-blues-rocker van Zanten has spent most of her life on the International Rock N Roll Highway, paving the way for the next generation of female musicians. Her “punishing slide guitar“ has her listed as “one of Canada’s best slide guitarists” (Randy Bachman) and garnered the fitting description of “Lucinda Williams meets Led Zepplin.” As an acclaimed songwriter and recording/touring artist, van Zanten is loved for her “straight from the heart, gutsy, and intimate” songs that can “give voice to thunder and fire the hearts” of all who join her in her passionate callings.

“Rachelle van Zanten is our voice, the muse of the north, a woman as strong and beautiful as the mountains, as fluid as the sea. She writes songs to inspire the wind, give voice to thunder, and fire the hearts of all sentient beings fighting to protect the land she loves so dearly.”

“After 11 years in the trenches, Canadian slide guitarist Rachelle van Zanten is done with bands. She just released her first solo album, Back to Francois, which is packed with funky blues riffs and stellar slide performances. The surprise is that van Zanten juxtaposes her gutsy guitar playing with very personal and introspective lyrics- a stylistic trait she attributes to her diverse influences.”

“Rachelle van Zanten has come a long way from her bluegrass upbringing in the foothills of northern British Columbia. For over a decade, this Canadian slide guitarist and songwriter has been working out her soulful blues riffs and turning heads. When the award-winning Painting Daisies dissolved in late 2005, van Zanten seized the opportunity to launch her solo career, recording her “fresh and rootsy” solo debut Back to Francois with producer Joby Baker. Baker has since assumed the role of drummer, accompanying van Zanten on an exhaustive tour that has thrust this up-and-coming artist into the international limelight.”

“Simply put, this woman is the total package. A fabulous musician on keyboards and guitar, particularily on acoustic and electric slide guitar, a great voice and a strong songwriter with excellent pop and rock sensibilities.” 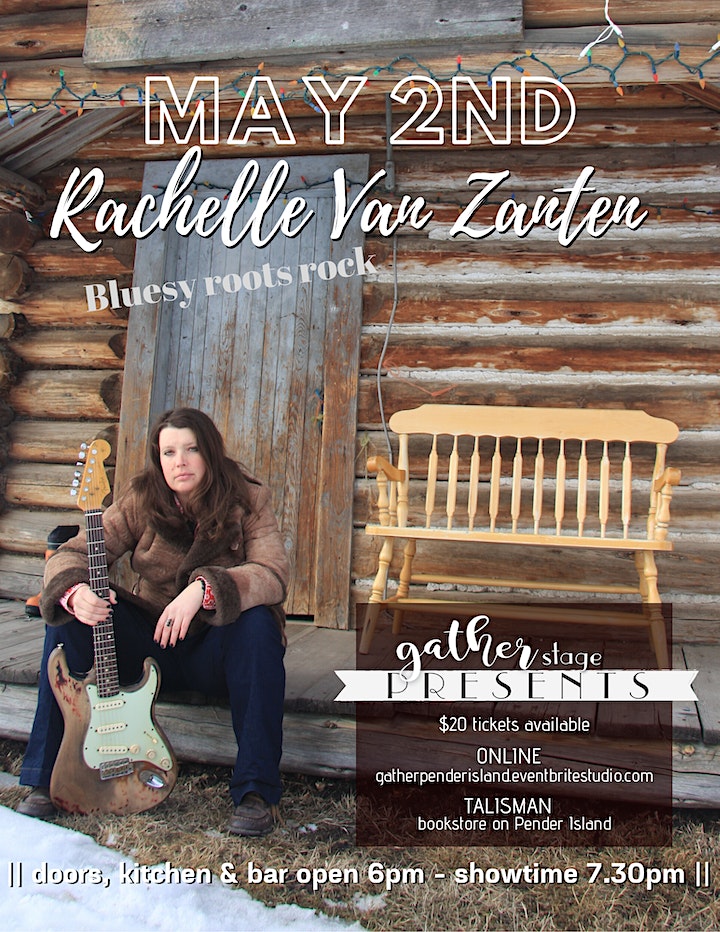 Gather Waterfront Eatery & Stage
4301 Bedwell Harbour Road
Pender Island
BC
V0N 2M1
Directions
Eventbrite uses cookies. By continuing to browse the site you are agreeing to our use of cookies. Review our cookie policy for more details