Barney Bentall, Tom Taylor and Shari Ulrich first played together in November 2007 at a songwriter concert on Bowen Island. Their continued collaboration grew from the undeniable enjoyment for both the artists and their audiences. One year later, they returned to Cates Hill Chapel and recorded “Live at Cates Hill”: an eclectic mix of the character, voices and songwriting talents of these three unique artists…or, as someone said, two Canadian legends and the number one draft pick!

With juggling all their respective projects it took until the summer of 2015 to embark on recording a second album. With Shari’s daughter Julia Graff and partner James Parrella engineering, they set up camp in Barney’s house with his two golden retrievers, Haddie and Tilly providing inspiration and wags at the appropriate moments. The teamwork was effortless and created an album of which all involved are exceedingly proud.

The trio was thrilled to have the highly regarded Canadian label Borealis Records, enthusiastic about the releasing the album, which is slated for a February 12th launch.

Barney Bentall and his band The Legendary Hearts recorded and toured extensively in Canada through the late 80s and 90s.  In 2000 Barney traded in his rock and roll life for that of a cattle rancher in the Cariboo, deciding that he would only write songs when they wouldn't leave him alone.  “It was an interesting and challenging time that I wouldn’t trade for the world but ultimately the call of music ruled the day”.  In 2006, Bentall headed into the studio with long time friend Jim Cuddy producing and began work on what would become Bentall’s first solo record Gift Horse. Those songs have renewed Barney’s love of performing, both in the form of solo acoustic shows and of the Cariboo Express, (which includes his son Dustin, Ridley Bent, Kendel Carson and many others), and most recently, his partnership with Shari and Tom.  Barney is currently working on a new record and has released 3 solo albums (post Legendary Hearts) including the latest “Flesh and Bone”.

Tom Taylor has spent most of his musical career playing in the Vancouver cult band "She Stole My Beer". After two albums and years of touring, the band took a hiatus, prompting Tom to pursue songwriting as a solo artist. His first solo album, "King of July" (2005) was released on Curve Music in Canada, and also found international distribution. In 2008 Tom teamed up again with Juno Award-winning multi-instrumentalist and producer Steve Dawson to record “Running Late” (Curve Music). 2013 saw the  release of “Pull Over Here”, produced by longtime friend Barney Bentall. More recently, Tom has been playing and recording with BTU. Taylor carries on the classic tradition of the singer/songwriter - a troubadour who can effortlessly draw listeners into his world. www.tomtaylormusic.ca

Shari Ulrich’s finesse on violin, mandolin, flute, piano, sax and dulcimer was first heard in the early 70s with the Pied Pumkin.Her work with the Hometown Band paved the way for her solo career as a touring songwriter. 2014 marked the released of “Everywhere I Go”, her 8th solo album and earned her “Songwriter of the Year” at the Canadian Folk Music Awards. It is her 20th release including her work with the Pumkin, UHF, BTU, and The High Bar Gang (a bluegrass band with Barney - also a CFMA a winner for Vocal Group of the Year). As well, Shari composes and produces music for documentaries, teaches songwriting, and produces the long running Bluebird North songwriter series in Vancouver. www.shariulrich.com 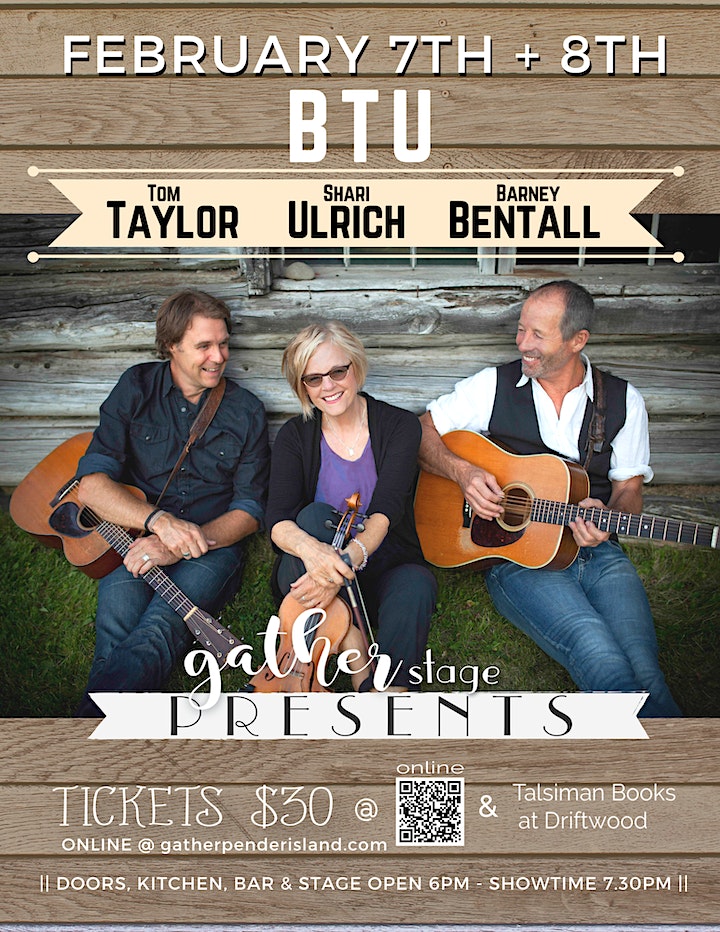